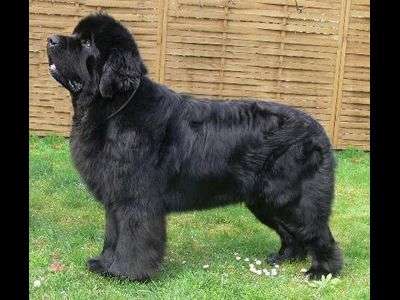 There is some speculation on the origins of the Newfoundland breed. Some say the line started with Black bear Dogs used by the Vikings, but this story likely has little basis in truth. More probable, the modern Newfoundland breed found it's roots with what is now called the lesser Newfoundland, or St. John's dog, that lived and worked with fishermen in Newfoundland, Canada. As one could assume from the name, this breed was of smaller stature. The St. John's breed was then crossed with Portuguese Mastiffs that came to the island with Portuguese fishermen around the 16th century. As well, many St. Bernard lines have Newfoundland blood in them and indeed the Newfoundland, St. Bernard and other Mastiffs share similar characteristics. The Newfoundland breed was used by fishermen to help haul nets, rescue items and people that went overboard and even pull small carts on the mainland. There are many stories of the heroics of this gentle giant in rescuing people from the sea.

The Newfoundland is a large dog growing as large as 29 inches at the shoulder and averaging as much as 150 pounds, although the largest newfoundland on record weighed 260 pounds, so extremes do exist. Needless to say, these are very large dogs. The Newfoundland breed are water dogs and as such have an oily double coat; a course water resistant overcoat and a softer undercoat suited for swimming. The breed also has webbed feet to aid in swimming. Coat colors include black (most common), black with blue highlights, black with white markings, brown and gray. There is such a coloring as white with black markings known as a Landseer that, in some European countries, is considered its own breed. The Landseer possesses slightly different characteristics, notably longer legs and smaller build, but largely the Landseer and Newfoundland are considered the same breed. Eyes are brown and the nose is black except when the coloring of the dog is brown, then the nose has a chance of being brown to match.

Despite their massive size, the Newfoundland breed is very gentle and friendly, not displaying any aggressive behavior as a standard trait. Characterized by gentleness, loyalty and intelligence, a Newfoundland is a wonderful family pet that does well with children and other, smaller, animals as well. It is best to introduce other dogs and pets at a young age and correct any aggressive behavior quickly, but overall there should not be a problem with a Newfoundland in terms of them attacking or being rough. they are protective of their family, but will likely either corner a threat or else place themselves between the family and the threat. Given their bulk, this is more than enough protection.

Being a large dog, a Newfoundland can be expected to live about 10 years, with 15 years being a maximum. Although they are very large, they are not as active as some smaller breeds and do well in the city or even apartments so long as they are walked daily. Newfoundland's love the water and, given the chance, they will lie in pools or swim. The Newfoundland breed does suffer from a hereditary heart disease called sub-aortic stenosis (SAS) as well as hip dysplasia. It is also important to not let your Newfoundland grow overweight.