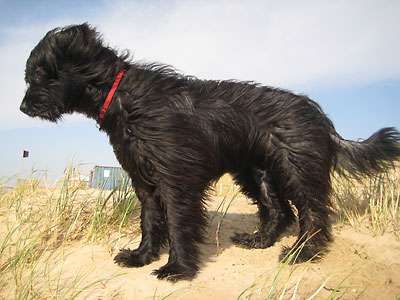 The Chien de Berger des Pyrenees a poil long, or Pyrenean Sheep Dog Long-Haired, as it is known in English-speaking countries, is native to France, as its name implies. Considered to be the country's oldest breed, they were commonly used during World War 1 as messenger dogs, due to their amazing speed. Unfortunately many were killed during this period, and their numbers dwindled. Once the war was over, French shepherds initiated a breeding program to bring the breed back, and their energetic and hardworking nature made them popular as rescue dogs. With relatively few health problems and a happy, outgoing nature, they also became popular as a family pet. In 1921 a breed standard was adopted, and the Pyrenean Sheep Dog began to appear at dog shows.

Because the Pyrenean Sheep Dog has not been over-bred, it does not suffer many hereditary health issues. Epilepsy and hip dysplasia are sometimes reported, as well as patellar luxation or "floating kneecap", a condition where the kneecap dislocates out of the patellar ridge and causes sudden pain and lameness. This can come and go within minutes; it is more prevalent in small dogs due to their shallow patellar ridge, which keeps the kneecap in place.

The Pyrenean Sheep Dog has a high energy level, but otherwise is fairly calm and well-behaved, provided that he has been properly trained and socialised. They tend to be a bit wary of strangers, so early socialisation with both other dogs and with people is essential. Once familiar with a new face they are loyal and affectionate. One thing to keep in mind is that this dog needs exercise, and plenty of it. The Pyrenean Sheep Dog is not a city dweller, nor will he thrive in an apartment setting. This breed needs room to run, and activities to keep his busy mind occupied. They excel at agility; in fact, a Pyrenean Sheep Dog won the World Agility Championship in 2003.

The Pyrenean Sheep Dog has two specific coat types: Smooth-faced and rough-faced, the latter exhibiting more hair around the muzzle. Some are grey or brindle, but fawn is by far the colour most commonly seen, with or without a black "mask". White marks are considered undesirable, particularly in show-quality dogs. The coat is waterproof, and requires little care except for regular brushing.

The Pyrenean Sheep Dog long-haired is a relatively small dog as sheepdogs go. The male is 15 to 22 inches in height, and weighs between 15 and 35 pounds. Females are only slightly smaller; there is no great difference between the sexes. The body should be light but strong; sinewy rather than muscled. The tail can occur naturally bobbed, or long and straight, with a crook at the end.

With its quick mind and willingness to learn, the Pyrenean Sheep Dog makes an ideal pet for a family with children. Agility, flyball and just plain fun are some of the activities this dog loves and usually excels in. He will be happy to join in on any kind of family adventure. Lots of exercise and plenty of socialisation will make the Pyrenean Sheep Dog a pleasure to have as a member of the family.